You are at:Home»Miscellaneous»A Snapshop of Americans in 2012 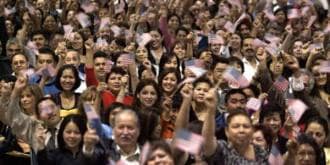 Awhile back, a survey was conducted by Pew that wanted to answer the question of how Americans viewed themselves. Are they better off than, say, a decade ago? Do Americans consider themselves wealthy? Struggling? Poverty ridden? The study, conducted by several economic analysts associated with Pew, revealed more of us believe we’re lower class from a financial aspect. The way we see money, credit and the future of our children is revealing. Here’s a bit of what they found.

One of the most interesting aspects is found in the number of Americans who say they are in the lower-middle or lower class. That number has increased in three short years from around 25% to 33%. Those who are younger than thirty believe they’re in the lower class than ever before. And, it’s most whites and Hispanics who believe this. For blacks, the numbers are a bit more stable from three years ago. Now, around the same number of races – around a third of each – believe they are lower class in terms of finances.

As they look to their own future and that of their children, many in the lower class see their prospects dimming. About three-quarters (77%) say it’s harder now to get ahead than it was 10 years ago. Only half (51%) say that hard work brings success, a view expressed by overwhelming majorities of those in the middle (67%) and upper classes (71%). While the expectation that each new generation will surpass their parents is a central tenet of the American Dream, those lower classes are significantly more likely than middle or upper-class adults to believe their children will have a worse standard of living than they do.

Other findings –
The share of college graduates who place themselves in the lower class grew from 12% to 17%.

Roughly a third of all men (34%) and women (31%) say they are in the lower class, an eight-and seven-percentage point increase from 2008.

One question posed to the participants included where they would place their families in terms of class during their childhoods. The findings revealed than slightly more than 60% say they were raised in the lower class. This suggests few believe they’ve left the lower class based on where they rank themselves today. Approximately 12% say they grew up in upper-class families and are still in the upper class.

But what about the finances? How do people see themselves today than, say, five or ten years ago? Here’s what the study found.

Finally, there are differences that also emerged when it comes to housing. Close to 90% of homeowners in all classes say they are happy with their homes, but only 60% of renters feel the same. Three quarters of whites who say they are lower class are satisfied with their housing and 65% and 69% of Hispanics and blacks, respectively, say the same.