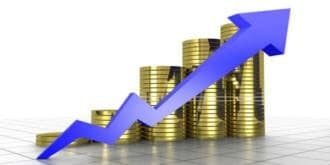 Looks as though there are fewer American banks tethering on disaster these days. After exploring the profit sheets of several of the largest banks in the U.S., it looks as though profits are up – in fact, they’re higher now than they have been since 2006. There are fewer bank failures and it appears many are finally contributing to the economy again as the odds of failure is lessening. The economy is healing, albeit slowly, but there are a few consumers who are once again shopping for personal loans and other financial products.

…for the first time since 2009, banks’ earnings growth is being driven by higher revenue – a healthy trend.

No longer are banks relying so much on those retained monies in case of financial losses. They’re growing confident with a more confident economy and more confident consumers. Plus, banks had previously managed to boost earnings by putting aside less money for those possible losses, which of course, was a big gamble. The money banks had to set aside for possible losses fell 15 percent in the third quarter of this year from the same time in 2011. The portfolios have consistently been strengthening and more consumers are paying their loans on time. In fact, losses from loans have dropped for nine quarters now. Couple this with the proportion of loans with payments overdue by 90 days or more that have dropped for 10 straight quarters, and it looks good for both lenders and borrowers.

Signs of the industry’s gains:

In the third quarter, the collective banking industry’s earnings reached $37.6 billion. This is up from $35.3 billion from the same quarter in 2011. And the numbers haven’t looked that good since 2006, a full two years before the recession.

The fact that banks around the country are beginning to lend again is indicative of a better 2013. In fact, the loan amounts rose 3.2 percent over the past year. Remember – consumer spending accounts for a massive 70 percent of the economy.

There aren’t as many banks at risk of failing, either. Using the third quarter as an example, the number of troubled banks, via a confidential FDIC list, is down again; this marks six consecutive quarterly drops. Currently, there are around 694 banks on this list, or 9.6 percent while this time last year, that number was 888, or around 11.7 percent.

With fewer risks come fewer bank failures. The numbers tell the tale. In 2009, there were 140 banks that failed. A year later, in 2010, that number had risen to 157 – the highest in decades. By the time 2011 came to an end, regulators had closed just 92 banks. And while the definitive number hasn’t been certified, it’s safe to say that number for 2012 is only 51. Keep in mind, though, that’s still entirely too many, but the patterns make it clear that change is happening. In a great economy, that number will be less than 5, so clearly, there’s much left to be done.

Of course, the jobs numbers play a big role, too. Ah, but there are those who say, “Not so fast”. These jobs that so many keep touting are not as solid as they’d have you believe. Some analysts worry the 1.7 million jobs added in 2012 are misleading. There are those, too, who say the numbers are skewered because when temporary workers are hired, they’re immediately counted among the employed, but when they’re laid off and especially if they don’t qualify for unemployment, the truth can get hazy. They say banks that take this as a sign to begin lending again must weigh those wild cards into their formulas.

The biggest “nerve factor” in play right now is the embarrassing inability for Congress and the White House to finally strike a budget deal to avert the “fiscal cliff”. This, of course, determines whether the steep tax increases and spending cuts that are set to kick in Jan. 1 will come full circle or if those calling the shots will be able to finally get it right. Failure to hit the mark is sure to cause great weaknesses in the economy and an entirely new set of problems, including a new recession.

Some are hopeful, though. Josh Siegal, CEO of Stonecastle Partners, a bank investment company, said,

We are definitely on the back end of this crisis.

Still, even if there are varying degrees of caution, it appears we’re finally turning a corner; we’re just riding the brakes and keeping it steady. So what are your thoughts? Is this is it? Are we finally picking up the pieces as a nation or are there too many wild cards, like fiscal cliff, and uncertainty in employment numbers? Think the new healthcare laws play into it?