You are at:Home»Financial News»Banking»Breaking: HSBC Could Be Preparing to Pay $1.8 Billion 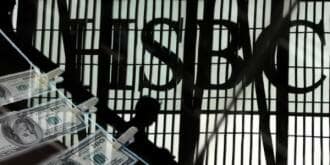 Earlier this year, we learned several American banks were under investigation for alleged money laundering. Now, one of those banks could be gearing up to make a big payout to settle those accusations. HSBC Holdings could be hit with a whopping $1.8 billion settlement as part of the ongoing U.S. law enforcement investigation. It should be noted this is coming from an insider who’s chosen to remain anonymous. That settlement could be formally announced as soon as this week.

HSBC is Europe’s largest bank and the entire year has been spent handling the various accusations over “lapses in money-laundering guidelines”. This, according to several insiders. While the details haven’t been hammered it, it’s expected the bank will enter into what’s referred to as a deferred prosecution agreement with American lawmakers. The settlement, if it’s accepted and has actually been going on behind closed doors since the late summer, will serve as a indication to other banks around the world about how this country views lax safety checks for monies coming through American banks. As one source said, “American prosecutors want to half illicit flows (of money)”. Another spokesperson said he and his bank were cooperating with authorities at every level with all of the ongoing investigations. He stopped short of disclosing what those cooperation measures include, citing confidentiality issues for both the bank and the government.

But if the bank gets off with just having to pay a hefty fine, what does that mean for others facing similar charges? For that matter, is the bank receiving special treatment as a way to keep foreign relations in check? In other words, how much of a role is politics playing? HSBC has acknowledged in the past that it knows it could face criminal charges, but it also knows that’s unlikely if history holds. Many previous similar U.S. investigations have resulted in deferred prosecution deals, where law-enforcement agencies delay or forgo prosecuting a company if it admits wrongdoing, pays a fine and agrees to clean up its compliance systems. If the company missteps again, the Justice Department could prosecute. Doesn’t seem like much of a deterrent, especially if a bank is willing to risk money laundering.

Some are already crying foul, “It would make a “mockery of the criminal justice system,” said Gurule, who is now a University of Notre Dame law-school professor. He said indictments of higher ups in these banks is the only true deterrent.

That would send a shockwave through the international finance services community. It would put the fear of God in bank officials that knowingly disregard the law.

If there were those who thought the settlement would have come before now, it’s likely the Justice Department, along with its many prosecutors in Washington and beyond, keeping things are a slower pace. There has been talk of significant disagreements that have broken down talks up until now. Not only that, but new information suggests those insiders had been arguing up to two years before the first indictment was even handed down. HSBC, according to those insiders, faced more than 170 million potential money laundering counts. Finally frustrated with the bickering, another agency picked up the file and ran with it and July, the U.S. Senate Permanent Subcommittee on Investigations was prepared to release its findings. And they stung. It said HSBC allowed clients to move shadowy funds from Mexico, Iran, the Cayman Islands, Saudi Arabia and Syria. That’s illegal, of course – and this is where many are wanting the criminal charges to come from.

So why have so many attorneys chosen these delayed or deferred prosecution agreements in recent years. If you ask anyone at the Justice Department, you’ll like get an answer that includes too much prosecutorial leeway on the part of the lawyers and the willingness to simply drop the cases due if they do agree to compromise. With overwhelming numbers – more than 200 in the past 8 years alone – many are saying it’s time to stop hiding behind these agreements. At least one U.S. AAG agrees. Lanny Breuer, a U.S. AAG, said in recent interview that he’s heard nothing but criticisms over the choices of some prosecutors. He also tempers that statement by saying just as many aren’t proffered these gravy deals. The agreements “have become a mainstay of white collar criminal law enforcement,” said Breuer.

But just because the U.S. bypasses the criminal consideration, most often, they’re also free to refile those charges if new accusations surface.

There have been several American banks who were given these generous breaks. In March 2010, Wells Fargo and Wachovia entered into a deferred prosecution agreement to pay $160 million as part of a Justice Department probe that examined how drug traffickers moved money through the bank.

So what are your thoughts? Are these banking conglomerates getting off too easy?