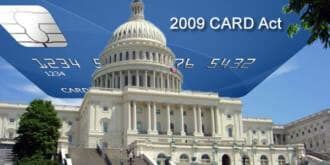 Two years later, how is the 2009 CARD Act doing under the administration of the Consumer Financial Protection Bureau? We wanted to know what – if any – changes these new laws have brought to credit card consumers so we went straight to the source. You may recall CFPB assumed responsibility for administering the CARD Act, and as a result, everything is public. Take a look –

The CARD Act went into affect in May 2009. It was one of the first big moves in the Obama Administration and President Obama was vocal in his belief the credit card market needed “serious reform”. This was his idea of a solution and despite its success (and few can argue it’s not been), it’s not been a big point in his re-election efforts. It passed with strong (and surprising) bi-partisan support.

CFPB surveyed the nine biggest credit card issuers in the country last year. These nine companies make up 90% of the credit card market. The bureau wanted to know each of their beliefs and thoughts on the law. They wanted to know what their current practices were, what they had planned for the future and how satisfied they feel their customers are. To that end, the bureau also polled cardholders around the nation to see if their thoughts were in line with their card companies believed. What it found was big changes in the industry as a whole and it cited four “significant” ways those changes have happened and what they mean for the everyday consumer. Even we were surprised by some of the findings.

Sudden interest rate hikes by credit card companies have been “dramatically curtailed”. This, of course, is due to the new laws that say credit card companies must provide a significant window of time – 45 days – from when they tell you they’re going to raise your interest rate and when that effective date kicks in. Not only that, but in most cases, card companies cannot raise your interest unless you’ve missed two consecutive payments. It’s certainly created a stronger sense of trust in consumers who aren’t blindsided by opening their statement to see a big point increase in how much interest they’re paying on their credit cards.

Another finding has to do with the late fees consumers pay these days. The bureau says it’s been “substantially reduced” and overlimit fees have “virtually disappeared in the credit card industry”. Surprisingly, some credit card companies would calculate late payments if they were received at a certain time (usually after 5 pm) on the due date. Now, though, that’s no longer possible. If the payment is received on the due date – regardless of the time – it must be counted as on time with no late fees. Not only that, but if a card company doesn’t allow at least a 21 day grace period, it cannot charge a late fee at all. Those fees must also be “reasonable and proportional”. Your first late fee cannot exceed $25 and subsequent late fees cannot exceed $35 if it’s within six months of a previous late payment. Further, late fees cannot exceed the minimum amount due.

While there still exists some confusion in how different costs are calculated, both consumers and credit card companies report that gap is closing as well.

In one year, the study showed that the CARD Act reduced late fees for consumers by more than half. In January 2010, consumers paid slightly more than $901 million. In November 2010, that number had dropped to just $427 million in late fees. Those late fees that were being charged if a payment was received the same day, but after a certain time? They accounted for a whopping 30% of all late fees being charged by credit card companies before the law went into effect.

The statements we receive in the mail are much clearer these days, too. Understanding the various fees and charges was complicated on some statements and as a result, each monthly credit card statement must now have information about how long it will take to pay the balance if the consumer pays only the minimum amount due. Other information includes how much will have to be paid each month if that consumer wishes to pay the balance within three years. The interest you’ve paid year to date is also included and some credit card companies voluntarily provide even more detailed information.

Clearly, there’s been much progress courtesy of the 2009 CARD Act. It’s improved consumer relations with their card companies and frankly, it’s given the credit card industry a much-needed boost from a public relations stance – and from an unlikely source. But what are your thoughts? How has the new law affect you and your finances? Share your story with us.