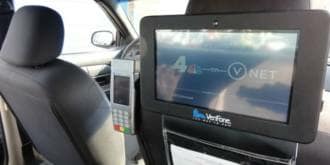 For quite some time, there’s been talk of installing credit card readers into all 6,500 of Washington DC’s taxi cabs. The reasons for installing a new system are numerous and the reasons not to are few. It makes sense, then, that efforts would be put into high gear, especially with this week’s inauguration festivities. Unfortunately, it hasn’t played out that way and now, at a last minute meeting, the city’s plan to install credit card reading technology has bee delayed – well, sort of anyway.

Turns out, a panel of administrative law judges ruled Friday that a contract to install the meters was improperly handled. The city, in its efforts of putting together a cohesive and seamless effort, contracted with Verifone systems. The $35 million bid that won the technology company the contract is “riddled with pervasive improprieties.” There were seven companies competing for the contract and as it turns out, Verifone didn’t submit the lowest bid after all. The companies that lost sued. The ruling leaves no room for misunderstanding the legal repercussions of the city’s hasty decision making process.

In that ruling, the judges said the city offered “meager” documentation to justify the VeriFone award. They also minced no words when they criticized a city contracting officer for opting to bypass an independent analysis of the bid proposals. The ruling said that the judges were “troubled by the numerous unexplained and glaring errors, inconsistencies and oversights that clearly occurred” during the procurement process.

But that’s not the end of the litigation and it would seem the progress being made to find a better solution for a standardized citywide smart meter has lost its urgency.

This ongoing effort had many cab owners and drivers hoping for a successful inauguration day, and a successful day would mean the ability to accept credit cards, thereby upping the opportunities to turn profits. The D.C. Taxicab Commission, when all the brouhaha began coming out, said it would instead issue new regulations that will require all city taxicabs to accept credit cards by March 30. They can use whatever service they wish, provided it allows acceptance of all the major credit cards.

Chairman Ron M. Linton said that as far as the other features of the proposed smart meter system that might not be options in individual contracts cab owners make with companies, those will be part of a new procurement package. Those features might include an interactive screen, GPS navigation and “panic buttons” that can alert law enforcement.

So why allow the possibility of several different companies to contract with drivers, especially if there’s a question over how seamless those companies will make the city wide efforts? Linton explained this latest decision that allows drivers to choose their own device came about for a few reasons, one of which includes the recognition that technology has changed quickly since the smart meter system was first contemplated.

When the smart meter concept was introduced last year, he said the one contract approach made sense because it would allow all of the technological advances to hit the cabs at the same time,

A year ago, when we came up with the “smart meter” concept, it was a way to get credit cards and the other kind of technological things we wanted in the cabs quickly. Since then, there are six, seven, eight companies coming in here offering credit card services.

Call Your Own Shots

Indeed a new letter to officials say the needs of the city have changed and there’s no legitimate reason for a “single, integrated hardware focused meter system” and that efficiency is best found by allowing each cab owner to determine his own needs. This makes sense, especially consider the Taxicab Commission has made it clear that it won’t be paying for the credit card technology.

That’s important since the initial contract award went to the priciest bid. The option to pick and choose their own systems at “substantially lower costs” than the $35 million contract with VeriFone Systems frees cab owners and drivers to avoid what has been called “one of the more expensive…if not the most expensive” package. Unfortunately, though, it’s not quite that simple for taxpayers.

There are the costs associated with canceling the Verifone contract and it’s to be shouldered by taxpayers. Suddenly, the financial aspects go from the cab owners to the taxpayer and the one dynamic that’s responsible for the mess – the DC Taxi Commission – has avoided having to pay out a single penny. One judge was fed up rather quickly. Judge Marc D. Loud, Sr. wrote in his ruling that the contracting officer, John R. Dean, was “a virtual no-show in the proposal evaluation.” Dean has since left the city.

Bottom line, though, is that the credit card option has been delayed yet again. VeriFone, for its part, has been ready since at least last summer when it presented its system to city officials during a press conference. It was also prepared to have the cabs ready to accept credit cards by the time the inauguration rolled around. A legal ruling halted it, of course, and now, there are no new timelines or conditions that have been issued since the ruling.

It could be months since the city canceled the contract and announced it would begin the bid process again. The only uncertainty is whether or not the Mayor and City Administrator will approve these latest efforts. Linton believes a lot of this is unnecessary,

It does not have to start from scratch…there are other ways of doing this.

He said his goal was to make the transition as quickly and efficiently as possible.

For now, those in DC can keep their credit cards in their wallets next time they go to pay for their cab ride. Ideally, before the year’s up, those same consumers will have the option of scanning their debit or credit cards. Whether or not that ultimately happens remains to be seen.

What are your thoughts? Should the poorly planned contract cancellation be shouldered by taxpayers or should the Commission eat those costs?