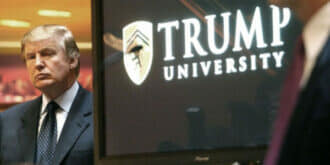 Donald Trump is doing battle with New York’s Attorney General. While it hasn’t made it to a courtroom yet, both are stooping to new lows in the media. New York AG Eric Schneiderman filed a $40 million civil lawsuit against not only Trump, but his Trump University. For whatever reason, Schneiderman filed the suit over the weekend. He says the Republican billionaire has been defrauding students who shelled out thousands to attend his real estate school. The for-profit institute, Trump University, was recently renamed and is now the Trump Entrepreneur Initiative.

Of course, never let it be said that Donald Trump shies away from controversy. He’s had his share over the years, including more than a few involving the current president. Remember this:

Yeah. That was little more than a short YouTube video challenging the president to show his college transcripts to the world and if he did, Trump promised to donate $1 million to the charity of Obama’s choice. Not quite the shocker Trump built it up to be, but hey – it made for interesting tweets as the tension rose in the minutes before the big reveal.

Heavyweights and Not Much Green

But no, this lawsuit is different – mostly because it wasn’t Trump’s theatrical brain setting it up. The lawsuit claims Trump used his global celebrity and financial status to lure students into a school that promised unrealistically and delivered disappointingly. It began as a free seminar. Once there, would be Trump-Wanna-Be’s were then encouraged to cough up $1,495 for a three-day workshop. Once that was done, those same students were then encouraged to invest in the $34,995 “Trump Elite” course. And that’s when Schneiderman called foul.

Perhaps the bigger question is why Schneiderman, with all of the big banks he’s pursued and government entities he’s gone up against, has an actual case. Of course, if it’s revealed that the program was a scam, it makes sense, but it’s not clear as to whether or not those who invested that kind of money into a real estate course weren’t happy or felt cheated. Let’s be clear, though: a $35,000 course? Doesn’t common sense kick in at some point? That’s a nice chunk of change to spend on a course. What it’s not, however, is the big buck cases Schneiderman usually pursues.

Remember, he’s the one that pushed for the whopping $20 billion settlement against the big banks, including JP Morgan Chase, over the mortgage robosigning scandal. He’s the one who took a no-holds-barred approach to dealing with what he referred to as “stunning” injustices. He also said a “quick, cheap settlement” of the nationwide – every single state – investigation into foreclosure practices. He said he’d settle for nothing less than a hard line approach.

He’s also the one who announced a few months ago that it’s time for New York politics to lose the “dark money” loophole. Now, those credit card receipts will need to be kept in order to close loopholes surrounding proper disclosure.

These are all very big stories that affect, really, the world as a whole. So why is Donald Trump even on his radar?

Schneiderman, who by the way, is Democrat (but we can’t help but wonder if there’s not a bit of Pub DNA coursing through his veins because of his conservative policies), calls Trump’s school a bait-and-switch outfit. Meanwhile, Trump’s accusing the AG of extortion and has basically dismissed it, even if it’s in his own mind.

So where is Schneiderman getting all of the inside info? He’s secured sworn testimony of Trump University’s former president, Michael Sexton. He insists Trump maintained a close eye on the school and read all of its promotional material, so he was always aware of what was going on. Schneiderman also said he got hold of the school’s “playbook,” which insisted that instructors keep pitching the upgraded, more expensive programs.

For whatever reason, the new trends show that heavy hitters in the spotlight – whether they’re political heads or celebrities or any other controversial soul – will hit the primetime news media shows. These two were no different. Both Schneiderman and Trump appeared – though not together – on CNN’s New Day” on Monday, where each raise the ante with their name calling and silly accusations. Trump called Schneiderman a “total lightweight”. But he went further,

He’s an incompetent attorney general who figured he could get some publicity on [my]back.

Yeah, that’s it, Mr. Trump. Maybe Trump figures if he’s going to teach it, he might as well project it. He tells viewers who watch the commercials for the school,

At Trump University, we teach success. That’s what it’s all about: success. It’s going to happen to you.

For his part, Schneiderman said the lawsuit was prompted by dozens of complaints from former students who contacted his office and the Better Business Bureau. He then says the lawsuit “completes one branch of a long-running investigation into for-profit schools”. He goes on to remind people that Trump’s school isn’t a university and reminds us all of how a university is defined: it must be a collection of colleges and they must be chartered. According to Schneiderman, those teachers never received any kind of certs, though we’re guessing they stayed the night at a Holiday Inn Express.

Apparently, those who shelled out the whopping $30,000+ were promised a photo with Trump (which makes us wonder what anyone’s motivation truly was anyway), but that they complained they were only allowed to stand next to a life-sized poster of The Donald. It’s those kinds of silly accusations that make us wonder why these two are bickering like mean high school girls competing over the last Diet Coke in the lunchroom.

Not only that, there are those now who insist the whole brouhaha is little more than a stunt, though both continue to deny that. So what does the lawsuit include? Here’s what we were able to find out:

The expensive program promised what it referred to as a “special” list of lenders the students would be given access to, only to receive a photocopy of a page from Scotsman Guide. Promises of ways to improve credit scores, when it reality, the actions hurt the students’ scores. Trump insisted the school was philanthropic, but paperwork shows it turning a nice $5 million profit.

We didn’t think we were going to get sued because we have a 98% approval rating,

If you go to Wharton or Harvard, they didn’t have a 98% approval rating. People loved the school. The school was terrific.