You are at:Home»Financial News»Everything You Need to Know About Fiscal Cliff 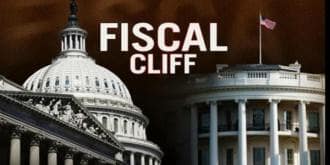 It’s all we’re hearing these days, and to be fair, we told readers weeks ago to gear up – because no matter who walked away with the presidency, that annoying fiscal cliff crisis was soon to follow. Within days after declaring President Obama the winner in the elections, every media outlet began hitting the fiscal cliff hard. While not much has changed in terms of what the fiscal cliff is and what’s at stake, we thought we’d take another look, polish up our initial reports and provide our readers the latest must know info.

Quick note: we pulled our answers from the Tax Policy Center as well as the Congressional Budget Office.

The one question that has dominated our inboxes over the past week is, “What is fiscal cliff?” The short answer:

Fiscal cliff is a series of spending cuts and tax increases that will kick in at midnight on January 1, 2013. There were a series of policies that were put into place way back during President Bush’s presidency that allowed tax cuts for Americans. They were designed to be temporary and they were designed to get the country over the financial crunch of our going to war following the 9/11 terrorist attacks. Those cuts, including several that lower income and payroll taxes and limit the alternative minimum tax, will expire. The government budget would be annihilated and 90% of all Americans will see their taxes increase. Defense spending and government spending will see deep cuts, as well.

This didn’t happen overnight; in fact, as far back as the summer of 2011, Congress was already looking for ways to cover the bases, albeit with bad choices. Congress passed the Budget Control Act, which raised the nation’s debt limit by $2.1 trillion. Part of the reason President Obama was able to get this passed was due to a very specific mandate that Congress would be required to find a better and permanent solution by January 1, 2013. If that doesn’t happen, everything expires. Remember, too, that when the BCA was passed, it was done for the very same reasons we’re in financial hot water now: Congress failed to meet its obligations until the last minute and had to scramble to prevent a similar ‘fiscal cliff’ from occurring then. Another lesser known aspect of the law requires funding for many government agencies and projects to go away – up to $1 trillion. It also requires immediate action by the Supercommittee to find another $1.2 trillion to cut.

If Congress drops the ball again and we fall off that proverbial cliff, here’s what to expect:

A recession would be almost instantaneous, though could occur anytime in the few few months of 2013. Unemployment jumps yet again. Jobless rates would hit somewhere around 9.1% by this time next year. Economic growth would be reduced by at least one half percent.

393 S&P 500 companies paid a dividend at the end of last year, the most in almost two decades. Today, that list includes fat yields from telecom stocks like AT&T and Verizon, right down to technology stocks like Microsoft and Apple.

The CBO says more than 700,000 jobs would be lost, 75% of all small businesses would crumble, if not from the fiscal cliff, then via Obamacare. Their tax rates would prevent them from even opening their doors.

Individual tax rates would increase, too.

And if you’re wondering what we could do after it happens, CBO says,

Nothing. The U.S. would hit a debt/GDP ratio of 90% within several years.

Congress can stop this. It must either increase taxes or cut entitlement programs – or a combination of both. The problem with that, though, is we can’t even get our elected leaders to agree on who won the election, much less on how to prevent the nation from going into a free for all. And if it seems as though there’s a bit of psychological warfare going on, you’re right. There are plenty who have fallen into a passive aggressive stance of,

I’ll show them. We’ll just let the worse case scenario happen and see how they like that.

The big question that’s being asked that no one has an answer to is: Will it happen? We know it could happen and we know an idea of what that means, but will Congress really let it happen? Well, it requires a bipartisan agreement and many in the know say everyone’s drawn their lines in the sand, including President Obama, who said during a televised statement last week that he’s not “wedded” to only his solutions and that he’s open to compromise, but that any compromise requires a tax hike for the wealthiest Americans. The Republicans say, “No way”.

After this week, Congress will meet for twelve more days before December 31st. There are Thanksgiving and Christmas breaks to distract them as well as the Libya crisis.