You are at:Home»Financial News»Banking»Google Partner Discover, Google Wallet On the Rise 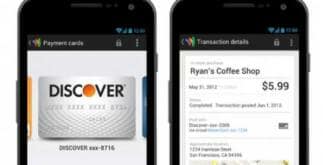 NFC-technology is the new standard for virtual payments and could very soon render the need to carry credit cards obsolete. Google is one of the companies leading the charge with their Google Wallet application for the Android mobile platform.

It has not been very long since Google unveiled its Google Wallet mobile virtual payment platform but that is not stopping the technology giant from moving forward with upgrades. They have recently made improvements to the software and interface so that their customers can start making payments through the Google Wallet platform and charging directly to their Visa, MasterCard, and Discover Card credit cards.

While Google Wallet is not the first program offered in the mobile digital wallet industry (think PayPal, for example) they are certainly one of the fastest moving. This should be expected of the company that has made a run at overtaking Apple’s iPhone and is currently standing strong, poised for such an industry shift. Google transformed the internet with its simple search options as well as with the Android open-development mobile software platform and they are doing it again with the virtual wallet industry.

Even though this industry is very young, Google continues to innovate and this time they are doing it by teaming up with Discover by allowing them to be the first company to use their Save to Wallet API that lets card members save their credit card information directly to the wallet through the issuer’s (Discover Card) online account maintenance center. Using this tool, then, Discover users will be able to sign into their regular accounts and access the Google Wallet app through Discover card, allowing them to quickly and securely transfer money or share information between the programs.

Again, this is the first time a major credit card company has ever used a feature like this; and given the relative youth of the industry, it is not yet known how well it will go over. Still, with Discover Card and Android both occupying decent shares of their respective markets, this could be the perfect partnership to usher in a new generation of payment processing. Despite Discover’s relative size, when compared to the much larger credit card companies (Visa and MasterCard, for example), and the somewhat slow reception of alternative payment methods in the United States, the partnership makes sense.

With mobile payment systems and virtual wallets not quite the norm in the United States this high-profile partnership will, at the very least, start turning some heads. For example, it will probably intrigue some Discover Card users towards, at least, investigating the benefits of Google Wallet; card users that might not have otherwise cared about the service. These interested parties, then, might be found somewhere in the reliable gaggle of customers who log into their accounts at least once a month to pay bills; Google Wallet might make this easier for them to do. As reception increases, then, and Google begins to partner with more credit card companies, this simple API could become Google’s next big profitable venture, something that is especially important during a time in which competition in the market is getting hotter.

Indeed, this partnership is good news for consumers. This is evident, though, in the fact that as Google has increased all major credit card support, they have “seen a significant increase in signups and app usage as people have loaded all their cards into Google Wallet.” Of course, Citibank-issued MasterCard holders already know this as they were, previously, the only customers who had access to the API. How this will all fare in the long run, though, is still up in the air.