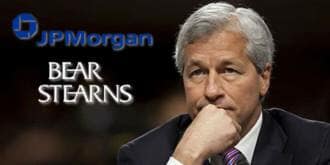 Facing yet another massive lawsuit, JPMorgan Chase CEO Jamie Dimon has taken to the media airwaves with his own justifications as to why he agreed to take on massive mortgage failure Bear Stearns. He says the government asked him to buy the company. Now, as a result of that favor, Dimon says his bank has not only lost up to $10 billion, but the lawsuits are just adding insult to injury.

I’m going to say we’ve lost $5 billion to $10 billion on various things related to Bear Stearns now. And yes, I put it in the unfair category,

Dimon said, speaking to the media at a Council on Foreign Relations event on Wednesday.

Some say Dimon is gearing up for the third quarter earnings report that’s due out on Friday when he insists the losses come from litigation and “writedowns”, along with other expenses. Others say the massive bank is finally feeling the heat as a result of the whopping new civil lawsuit from the New York’s attorney general. The suit wants to hold the bank accountable for allegations that Bear Stearns deceived investors buying mortgage-backed securities.

Earlier this week, Dimon, complete with his usual dramatic flair, said he wished to set the record straight. He said he and his bank “did the Federal Reserve a favor by buying Bear Stearns in early 2008”. For such an aggressive personality who seemingly writes his own rules and who, by his account, oversees the only bank that survived during the massive crash that set off the recession, taking orders and doing favors that aren’t a sure thing seems a bit more passive in the world of finance.

He said he told a government regulator when the “favor” was asked, to

please take into consideration when you want to come after us down the road for something that Bear Stearns did, that JPMorgan was asked to do this by the federal government.

The suit’s filed, the regulator is nowhere to be found and is still unnamed and yet, Dimon isn’t sure he wouldn’t do it all over again – despite the lawsuits. He could be banking on winning the case, although it’s not likely considering there are new laws the legal system can now use, specifically, the Martin Act, which eliminates some burden of proof necessary in these types of cases.

Continuing with his spiel,

I’m a big boy. I’ll survive… But I think the government should think twice before they punish business every single time things go wrong.

It should be noted there’s a lot going wrong at JPMorgan these days, including the massive flub made earlier this year that resulted in an estimated $6 billion loss, which Dimon says doesn’t affect his bank one way or the other. There is also an investigation by federal law enforcement that includes money laundering at JPMorgan Chase.

Still, Dimon found time to criticize the same system that’s made him a multi millionaire. He also complained about the potential for $1 billion in costs on an annual basis due to the new financial regulations.

Finally, though, he did manage to take some responsibility for his bank’s legal troubles, albeit, in a curious way:

I should have caught it…I didn’t. It was personally embarrassing and really intensely stupid.

The big concern that Dimon and other big bank CEOs share is the assurances that “many” lawsuits are headed their way, courtesy of the United States government. For now, though, Dimon should be focused on the suit filed earlier this week in which Bear Stearns deceived investors into believing they were buying into above the board mortgage backed securities. Many recall that JPMorgan, via a government assisted sale, bought out Bear Stearns in 2008, knowing it was troubled and knowing it was shouldering much of the blame for the mortgage crash that led to the recession.

Now, the government claims Bear Stearns “systematically ignored defects in the loans and kept investors in the dark”, according to the suit by New York Attorney General Eric Schneiderman. While Schneiderman has been busy with these types of lawsuits, this is the first one that includes a combined effort from both federal and state officials. New York is insisting JPMorgan return all of the profits it garnered as a result of the fraud. The state also wants the bank to pay damages and it’s possible the tables have turned. Many are saying the banking giant is cornered.

Meanwhile, Schneiderman said “We are looking forward to more cases,” on Wednesday. He and his office continue to defend their justifications in going after the bank, despite Dimon’s accusations that he was strongly encouraged by the government to buy the bank with that same government’s assistance. Schneiderman concluded:

The liability traveled with the company, so it would be far worse for us to send the message that this kind of fraud is to be tolerated. No one is above the law.