You are at:Home»Financial News»Moody’s Reports ‘Growing Fiscal Distress’ in CA 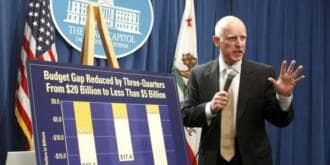 California’s cities are struggling and it’s not going unnoticed by the nation’s top credit rating agency, Moody’s Investors Service. Citing a “growing fiscal distress in many California cities” as the reason many bondholders are at risk, it says it expects many more municipal bankruptcies and other defaults in the coming months. California officials are worried and the fact that Moody’s also cut the city of Fresno’s credit rating from an A to BBB – a total of three notches – isn’t helping matters.

Currently, three California cities are under bankruptcy protection – Stockton, Mammoth Lakes and San Bernadino have all filed for Chapter 11 bankruptcy this year. Most agree these won’t be the only three to file before the year’s up. Moody’s says some cities are using their bankruptcy options as a “new strategy” in their efforts of tackling budget deficits and obligations to bond holders. One of those cities, San Jose, has drastically cut the hours of its library, laid off police officers to cut costs and most recently, residents voted to cut the pension benefits for city workers. But while the city is taking steps to reassure investors of its fiscal health, there is simply not much else it can do to control larger fears about the municipal bond market.

And now, with Fresno’s credit being slashing, worries are heightened further. Moody’s says Fresno’s general fund remains unbalanced, despite the cuts in the city’s work force. Moody’s comes in behind at least two more rating services that have lowered its rating. Some analysts say this is more of a proactive approach in an environment where ratings companies don’t want to be wrong, so they tend to lean in a more conservative direction.

Meanwhile, Fresno City Manager Mark Scott said he knows his city isn’t in the “greatest” financial shape, but he also insists it’s not as bad as some might believe. He also said Moody’s downgrade came as no surprise to him or any of the other city leaders. But, as Scott has been known to do in the past, he makes his lemons into lemonade. Scott says the city is actually in a fortunate position because his city’s problems aren’t long term liability considerations, but rather, a cash flow problem.

I know we’re not looking at bankruptcy, but they don’t know that. So I can’t blame them for doing that. I think if I was in their shoes I’d probably do the same thing,

Still, Moody’s is taking no chances. For some time, the municipal bond market has been characterized by low default rates and relatively stable finances; however, as more bankruptcies are being filed, it’s clear that model is no longer representative of the market. As a result, the agency will reassess the financial position of all the cities in California, which is responsible for issuing close to 20 percent of the municipal bond volume around the country. The goal is to “to reflect the new fiscal realities and the governmental practices.”

And while it’s at it, Moody’s is also expected to begin a nationwide examination of municipal bonds around the U.S. with the goal of identifying other areas facing similar troubles. While it’s not releasing the states it intends to focus on, it’s likely a few states are on the short list, including Nevada and perhaps Michigan.

Even if Fresno is taking everything in stride, state leaders aren’t handing it as well.

Moody’s has an obligation to review changing circumstances, but we would just suggest that their assessment of the framework and ground activities is perhaps exaggerated,

Not only that, but the state treasurer’s office also voiced concerns that many might be overreacting to the three cities that recently filed for bankruptcy protection. It seems minor when one considers California has 482 cities. The treasurer’s office spokesperson, Tom Dresslar, called the concern “slightly hyperbolic”

For some, that’s a bit difficult to muster, considering more than 10 percent of that state’s cities have stated they’re in a fiscal crisis. The biggest problem areas are found in the middle of the state and east of the Los Angeles area.

For now, Fresno is doing its best to keep its head above water.

It is a true catch 22 for the cities, counties and states because in bad economic times they don’t have the ability to deficit finance the way the federal government can,

And the jist of the situation is beginning to set in and the city can now no longer sell its debts, enter into long term less purchases and there also exists the vendor factor: no vendors are obligated to do business with a city with a lowered Moody’s rating.

Scott says he knows there’s no quick fix and acknowledges he and his city have a lot of hard work ahead of them,

We probably are going to have to demonstrate five years of fiscal discipline and continued increases in local revenues in order for those credit ratings to change.

For now, the city is moving forward with its 10-year plan that was put in place to pay back negative fund balances and rebuild its reserves. In order to make it happen, employee compensation packages must be re-negotiated and residential trash collection privatized. Still, Scott remains committed and hopeful, even as his city cut manpower and other public services with the goal of saving money.