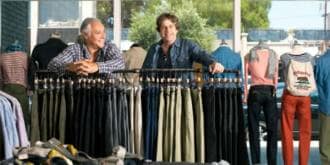 It’s small businesses across the country that are facing big budget cuts and the loss of more than one million jobs if the fiscal cliff comes full circle. A new report says if our elected officials don’t find a way to avert the $1.2 trillion budget cuts by January 1, the repercussions could be devastating.

Released by the Aerospace Industries Association this analysis reveals those small businesses with less than 500 employees will especially feel the heat. Close to a million jobs could be lost by companies this size. That equates to a whopping 45% of Americans who work for these businesses.

“Nearly half of all sequestration job losses would come from small businesses,” said George Mason University economist Stephen Fuller, who has studied the jobs impact of the budget cuts. Not only that, but this week, officials with the Pentagon delivered even more bad news before the House Armed Services Committee. They testified that the impact of a collective $500 billion in budget cuts , along with the $486 billion that’s already being cut, could threaten national security.

Sequestration would reduce our overall budget, forcing us to reduce purchases from businesses both large and small.

He then went on to say everything would suffer. Many have battled against these cuts for more than year as Congress has done nothing to prevent it. Many said it won’t even be thoroughly addressed until after the elections in November. Even the ominous warning of broken contracts by the Pentagon, which would surely equate to billions of dollars in termination fees and contractual considerations, have yet to light the proverbial fire under lawmakers. Cuts would be particularly devastating for small businesses, which have already taken big hits since the recession. Many would fold as a result. In fact, many small business owners have already said they face downsizing and layoffs that would drastically change the degree of customer service.

There are more than a few people who say the lack of action by the government is “foolishness”, “irresponsible” and even “criminal”. The president of AIA, Marion Blakely has been very vocal in the past and this latest news seems to reiterate what Blakely has said for months – the budget crisis is so bad that small businesses are already anticipating the worst and it’s on the shoulders of lawmakers. In an interview with Reuters, Blakely said just the thought of losing close to a million jobs in the small business sector could cripple it for years. She called it a “staggering effect of sequestration that people need to take into account”. For its part, AIA brought together hundreds of small business owners from around the nation and that focus on providing goods and services to the aerospace and defense industries. It was revealed then that orders have already begun slacking off and as a result of that, jobs are beginning to dwindle.

The Small Business Administration maintains records and estimates show that small businesses are responsible for employing half of those in the private sector. Not only that, but 65% of all new jobs over the past two decades were due to small businesses. A full one third of exports in this country are due to small business owners efforts. These budget cuts will most certainly have a widespread, instant and devastating result. The economy is left vulnerable and growth will be wiped out.

What many Americans may not realize is that small businesses are the ones who the government often awards contracts. In fact, small businesses accounted for 20% of contract awards by the Pentagon last year and 35% of the subcontracts it awards.

If small businesses begin failing and jobs are lost, the damage doesn’t stop there. It’s never contained and as a result, costs associated with with military contracts will like soar, the economy will fall even further below where it should be and massive tax increases with occur. Mackenzie Eaglen, resident fellow at the Marilyn Ware Center for Security Studies, said

Not only would the cost of doing business rise for the Pentagon if these firms dropped out of the supply chain, but the military and commercial economy would lose the benefits of these sources of cutting-edge technological breakthroughs increasingly required by our military.

It’s for these reasons – and many more -Americans are losing faith in their government. Any lack of response moving forward as January 1 nears, and if those tax credits expire, the results will be immediate and significant. The only problem is the elections come before the cliff – this is sure to pose more than a few problems for the Obama camp.

What are your thoughts? Do you think Congress will find a way to avoid the so-called fiscal cliff? And are you feeling the financial heat from an increasingly disturbing environment?