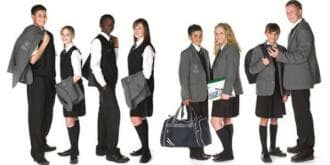 Did you know we’re raising a society of well dressed kids? While that’s a good thing, a new survey suggests we might be compromising our financial standing in our efforts of keeping the little ones looking sharp as a tack.

One thousand mothers of kids under the age of 10 were asked a series of questions. Here’s what those answers revealed:

These numbers are telling, but there’s a wild card in the mix, too. A growing number of school zones now require uniforms and it’s putting some parents in a tough position. One mom we spoke to in Houston said,

I have tried to find a balance with my girls and the emphasis they put on brand names. It my credit card balance low and also instilled a lesson that more money sometimes mean you’re buying a small logo for an additional fifty dollars. The problem is since the schools began requiring uniforms, I’m spending as much on those than I would be if I were letting my girls pick out the best in designer clothes.

It’s a growing sentiment, too.

Still, the moms we spoke, as well as the moms who participated in the survey, say they do stick to a budget,

The irony that school starts a couple of months before the holidays isn’t lost on me. My girls know that Christmas is one time I splurge and will invest a little more in the jeans they want – even if they do cost me more. But the uniforms? It’s going to be tough to find the right balance.

This guilt-realization could be why 25% of the moms surveyed say they disregard a budget even if they spend time preparing it with good intentions.

So what else are moms dealing with when it comes to back to school expenses? As it turns out, the Women & Co survey revealed the biggest drain on credit cards when it comes to these specific expenses are the fundraisers.

I hate it when fundraisers come around because ultimately, I’m going to end up with $300 of candles, gift wrap or chocolate and I’m going to pay interest for at least a couple of months on my credit card as I get it paid off

said one mom is St. Paul. The survey shows 17% of moms say they’re tapped out in terms of covering those costly efforts and requirements that students meet a certain sales quota.

And what about student loans for college? That’s another growing concern for moms around the nation. Almost 70% say they are uncomfortable with what they’ve managed to put back for their kids’ college educations. Half of the remaining 30% say they are “very uncomfortable”. They don’t want their kids to shoulder the financial burden, but they’re not sure they’re going to be able to take on the debt either. “I’m hoping scholarships will offset some of these expenses” said another mom we spoke to in Tacoma. This mom’s sister, on the other hand, is a mother of three sons and says her husband is always the one with the most self discipline and as a result, they have the money put back to send all three to college without having to take out any loans at all.

Next up, we wanted to know about kids and credit. Specifically, we wanted to know if parents were sending their kids to school with credit cards, especially considering the 2009 CARD Act has made it difficult for college students to have credit cards in their own names without a cosigner. The responses were overwhelmingly consistent. Our moms said they will absolutely send their college-bound kids to their dorms with a credit card.

The worst thing I can imagine is Laurie being 300 miles away with a need for something and then me not being able to get it to her fast enough. With a credit card, I know she can cover her needs.

When asked about limitations they might place on those cards, again, our answers were overwhelmingly supportive of restrictions.

Yeah, I don’t want him maxing out my Discover card on overpriced pizza or gym memberships,

said another mom. Our Houston mom with three daughters added to that statement, “Or the mall, either”.

For those moms with elementary or middle school age kids, 26% say the school supply list is unreasonable while another quarter of the respondents said either “some” or “most” lists are too complicated and specific.

Finally, we wanted to know what tips have worked for these moms when it comes to back to school. A few of our answers included:

So how do you spend on back to school needs? How do you handle the credit card debt that often comes with back to school expenses? Have any money saving tips you want to share with other readers? Drop us a line in our comment section or better still, go like our Facebook page and joint the conversation.