You are at:Home»Financial News»How is Sequestration Going to Affect You? 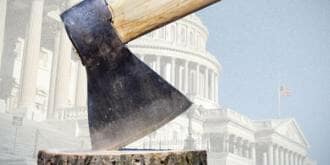 Now that Obama has officially signed the order implementing sequestration, you need to know how it will affect you. Since the Republicans and the Democrats were unable to come to an agreement about the fiscal deficit, the sequestration will ensure that $84 billion is trimmed off from a host of government programs and many of these programs are vital, certainly the military ones. There is plenty of waste and fraud at the federal level and it does not seem like this is going to change because of sequestration.

In general the sequester will hit federal government spending such as defense, homeland security, air traffic control, education, student loans, unemployment benefits, and healthcare. However, some of these changes will not start coming into effect until April.

The sequestration will lead to federal employees being placed on furlough. This means federal employees might have to work one day less per pay period and take a corresponding cut in pay. Welcome to the real world; this is what millions of Americans have already been doing.

This will affect others as well as federal employees are bound to cut back on spending since they face a potential pay cut. Businesses and services such as restaurants, dry cleaners, and others catering to federal employees can expect to see a slight decline in revenue. But the American tax payer will finally see the government facing cuts which is what they have been seeing for several years now.

The sequestration will affect the Head Start and other programs such as those targeting special needs children. Many school teachers will lose their jobs. Also, if you are a parent, you can plan for less support at school for your child. Parents who depend on the school system to provide a major share of the childcare will need to factor in additional child care costs at a time when they might be facing a cut in their incomes as well. Moreover, this lower finding of schools can affect the educational outcome of your child in the long term. But this is not saying much because the public school system in America, because of politics and the wrong priorities, has already been unimpressive.

American students do not score well compared to other developed countries in all sorts of subjects and this is while America spends more on education than any other country in the world by far.

The sequestration will reimburse 2 percent less to doctors and healthcare institutions than before. As such medical establishments will see a marginal decline in revenues. However, this will affect doctors and nurses more than the patients at present.

The biggest cut in spending, of 14 percent, because of sequestration will affect the Pentagon. This will lead to lower deployment rates, lower maintenance of ships and aircraft, and lower number of civilians employed by the Pentagon and defense forces. Armed forces personnel will not see active duty as frequently as before, but the preparedness of the equipment they use can also be lower. Moreover, if you work as a civilian in the defense sector or supplier to the Pentagon, than you are likely to see lower revenues as long as sequestration is in force.

Defense contractors and those who work for them will be affected negatively by the sequestration. As the Pentagon cuts back on defense spending, it will award fewer contracts for new equipment as well as well as maintenance. The number of people who are employed in this sector will come down. This will only make American enemies more bold and Russia, Iran, North Korea, and China are paying very close attention to America’s military commitment and status.

The FDA will also be expected to trim its expenses leading to a slowdown in drug approvals. Companies that were looking to release new drugs will have to be ready to wait longer to attain the required approvals.

The sequestration will also affect the way you travel by air. Most people will have to be prepared to wait longer at airports. This is because some controls towers might be shut down, smaller airfields closed, and fewer staff manning the security checks. All of these will lead to delayed flights and longer queues at the security check points as well.

Those on long-term unemployment benefits will stand to lose at least some of their unemployment benefits as the funds allocated for this will be trimmed by sequestration. The effects will be magnified by the fact that the sequestration will cut some federal jobs as well, increasing the pool of unemployed who too will need to be provided benefits and support. Well, considering that some people have been on unemployment for over three years now, it is passed time to either relocate or take a job that pays less.

The sequestration will cut funds aimed at providing support for the homeless. The emergency shelter and housing programs will be closed down, leading to an increase in the homeless including veterans.

The sequestration will affect the general population in three ways. First it will reduce the level of government service available. For instance, with the federal parks also being affected by the cuts in spending enforced by the sequestration, many parks will close sections, programs eliminated, and delay maintenance works as well. This will make a visit to a federal park less comfortable, safe, and fun than it used to be. The general population can expect delays in responses from a whole host of federal authorities such as the IRS and food safety regulators. Or perhaps some of these federal employees will have to work a little harder.

Second, the cut in the Federal spending could also lead to law and order and safety issues as firemen and police forces are forced to trim employee count. Fewer police personnel, prison officers, and firemen could turn minor issues into major law and order challenges. This will reduce the confidence of the general population in the administration.

Third, the loss of jobs and lower income that federal employees obtain will lead to lower spending by them impacting many small and medium businesses. This will affect employees in the private sector as well as business try to stay profitable by cutting jobs, offering lower pay, and so on. Since the major impact for the growth of the U.S. economy is consumer spending, the sequestration by directly impacting the consumer confidence of federal employees, their contractors, and so on, will also impact the consumer confidence of the country as a whole. The flip side is that many Americans are glad to finally see some cuts at the federal level since federal spending has been growing by the billions anyhow for the past few years with nothing to show for it.

While the actual spending cut of around 5 percent per department or $84 billion is but a small portion of the U.S. annual budget, it does show the world that America can cut spending. America’s debt is not something the world envies and it is something that needs to be dealt with and not ignored.

Benjamin is from Sacramento, CA. He has 2 master’s degrees and served 4 years in the U.S. Navy. He has worked at Wells Fargo Financial and has been investing in equities since 1995. He is a constant reader of finance articles and books related to business.