You are at:Home»Miscellaneous»Young Adults Rely on Parents, No Financial Independence 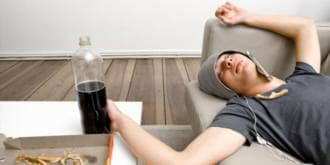 Words to make every parent cringe: Today’s young people don’t have high hopes for their financial independence anytime soon. That means exactly what those parents fear: more kids are sticking close to home.

Over the past two years, a shift has occurred in the mindsets of our teenagers and young adults and this is one mindset that some parents dreaming of an empty nest. The proportion of these young folks who expect to be financially dependent on their parents until their mid-20s has doubled. This, according to a new survey by Junior Achievement has many parents cringing and wondering what they’re going to do the get the kids out of the house.

So why the growth? Actually, if you think about it, it’s really a responsible mindset these younger adults have. They don’t believe they’ve be able to pay their bills off in order to afford their own place. Those bills might include credit card debt and student loans. Not only that, but the proportion of teens who expect to achieve financial independence by the ages of 18 to 24 has plummeted, from 75% in 2011 to 59% today.

If you’re thinking it’s all about the lack of motivation or even laziness, you’re wrong. They see the writing on the wall and they know the burdens of carrying their student loan debts and the lack of jobs in the country. There are those who don’t understand how budgeting and interest work, but even when they do, they recognize they’re against great odds.

There was a time, right after graduation, when I was told – by mother of all people – “I’ll visit you in college, but I won’t visit you in jail”. That was all the incentive I needed to put the wheels in motion, plus I didn’t want to rely on my parents. Everyone wanted to be out from their parents watchful eyes and surprisingly, that has shifted with today’s kids. There are no longer those connotations attached to moving back home or never even moving out. Forty somethings relied on roommates to make ends meet. We sacrificed sofas for futons and well balanced meals for pizza and Ramen. Not today’s young folks – they’re not having to sacrifice Mom’s cooking because they’re there every day when it comes off the stove. And futons? Not even in their line of vision. They’re still enjoying their bedrooms, complete with all the furniture a house needs, courtesy of Mom and Dad’s hard work over the years. And as they say,

There ain’t no shame in that.

But there’s more. Not only are they still living at home, but they’re allowing Mom and Dad to cover those monthly payments on everything from their Visa and MasterCards to their cell phones to their student loans. Many also say the parents pay the satellite TV bills, internet access and even their iTunes subscriptions. In fact, the Wall Street Journal conducted a survey that said 40% of parents still pay for their kids’ cell phone bills – even if they’re in their 20s. Even after their little bundles of joy leave the nest, Mom and Dad are still footing at least some of the bills.

On average, Mom and Dad spend $108 a month covering those phone bills.

Another survey, this time from Harris Interactive, found that while it’s not necessarily a financial burden at this point, it could be that parents are being stretched too thin. Most Moms would rather make sure their kids had a phone instead of increasing their contributions to their retirement accounts. But there’s another consideration too. Even as mom and Dad are helping Jr., they’re also providing financial support to at least one elderly parent. According to a Pew Research study published this past February, it was discovered that more than 40% of respondents who help support a parent say they either barely break even or don’t have enough money to meet their own basic expenses.

Still, there are two-thirds of young respondents in the Junior Achievement survey who are confident they will be as well off or better off financially than their parents are. Problem is, there’s a growing reality that many have no idea how to budget their own money. They know little about personal finance. Twenty five percent of them don’t know how to budget their money, balance a checkbook and even more have no idea how credit card interest is calculated. More than a third of those participating in the survey have no idea as to how to invest their money, either.

Part of the reason teens expect to live with parents longer may be because they are unsure about their ability to budget, use credit cards or invest money,

The Pew Study says it all,

The Great Recession and sluggish recovery have taken a disproportionate toll on young adults.

And let’s face, the rising costs of going to college, coupled with less than ideal job prospects after graduation is not something anyone’s prepared for. We go to college to ensure our financial futures and as it turns out, a brighter financial future just isn’t in the cards for most after graduation. That will shift, of course, with time. The problem is, no one sees the end in sight and often, once the dynamics are set up, it’s tough to break out of. Restoring credit scores takes years. Rebuilding their credit is challenging and for many, they much prefer the safer route of not even beginning to build credit until they’re sure they can do so successfully. As a result, Mom and Dad shoulder those burdens – both financially and with the potential of jeopardizing their own future financial security.