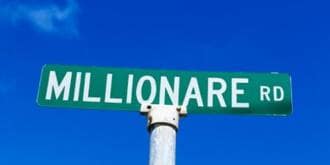 The story of The Millionaire Next Door is a familiar one to most personal finance readers. The premise of the book is an exploration of real-life millionaires who live a comfortable middle class existence.

The number one brand of watch among millionaires is a Seiko and one-half of the U.S.’s millionaires don’t live in upscale neighborhoods. What their wealth brings, rather than a luxury, is financial security. Because most of their wealth is not tied up in precocious stocks, 401K plans or other investments that can crash, they have financial control of their money. That gives them control of their future the way many people today just don’t have.

But what if you were wealthy and decided not just to live frugally, but to hide your wealth, to keep it a secret from all but those closest to you? Could it be done? And what would be the social and emotional ramifications?

If you’ve already been living a frugal life in order to amass wealth, it probably wouldn’t be hard. Only your spouse and accountant would need to know the truth. If you recently came into money, however, you’d have to be careful to avoid raising eyebrows around town. For instance, if you were having financial difficulties that people knew about, and suddenly came into a large sum of money, you couldn’t quit your job, move to a nicer home, and buy a new car. People would know something was up, and their suspicions could be worse than the truth.

In this case, making incremental changes in your life, such as upgrading your car to a more reliable, but still sensible model, continuing to work your job while exploring other career paths or hobbies you might find more fulfilling, and slowly fixing up your current residence would make more sense and help you keep your windfall private.

Why Do People Choose to Keep their Wealth Private?

There are a number of compelling reasons to keep your wealth private.

There are also a few very good reasons to simply continue to live as you have been, without necessarily hiding nor flaunting your wealth.

On the other hand, if you really like nice things and live to splurge, it can be difficult to hide your wealth while enjoying the finer things. But it can be done. In today’s society, it’s ironic that many people who don’t have a lot live as if they are wealthy, meanwhile digging a deeper and deeper hole of debt for themselves, while “millionaires next door” live comfortably but frugally, and people may perceive them as poor.

To keep wealth private, it must be necessary to have the self-esteem to not care what people think, the willpower to make the frugal choice over the luxury item, and the belief that you’re doing the right thing. Otherwise, you’ll feel guilty, as if you’re hiding a dangerous secret, and that’s no way to live and enjoy your financial security.

What Would You Do?

I’m not there yet, but it’s fun to think about how I’d react if I were wealthy. I suspect I enjoy luxury items too much to keep it a secret, but I might be careful about how much I let people know, for many of the reasons listed above.

When you think about it, finance is (and should be!) a personal matter, so it’s really no one’s business to ask how anyone manages to pay for anything. It does make you wonder how many “millionaires next door” you might know… and if it would really matter, anyway, if you did know the truth.

Dawn's extensive list of writing credits include top-name personal finance websites, where she enjoys sharing her views and knowledge on credit card reward programs, debt management and preventing or recognizing identity theft. A self-proclaimed compulsive shopper, she carries a keyring loaded with customer loyalty cards, but manages to stay out of (too much) debt through careful budgeting. She lives on Long Island with her husband, two toddlers, and four cats... and still somehow finds time to write for a living.