You are at:Home»Miscellaneous»Insurance»Get Financially Prepared for Hurricane Season 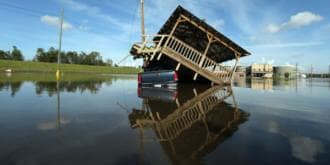 It’s that time of year again – at least, for millions of Americans – who are gearing up for the unpredictable weather that’s barreling towards us. Hurricane season begins in about five weeks and every year, there are many who are caught unprepared for a storm that enters the Gulf of Mexico or makes its way up the east coast. Dr. Gray’s annual forecast was released last week and not only is he and his team in Colorado predicting a busier than usual tropical season but many other meteorologists are doing the same. Before we delve into the financial considerations, take a look at what we can expect this year in terms of the tropics.

The fact that Gray’s calculations include a 72 percent probability that a major hurricane will hit the US in 2013, it’s little wonder that the experts are warning us to get a head start on our preparations. While we don’t want to get into the specifics, suffice it to say that the warm ocean waters tend to impede the phenomenon known as El Nino and when that happens, there are no trade winds above the surface that often knock the tops off of these storms. With nothing hindering them, they can grow into monster storms, much like Hurricanes Camille in 1969 and Katrina in 2005. Once they grow that powerful, steering factors no longer play a role in the landfall.

Like we do every year, we’re providing a checklist for our readers who might find themselves in the line of fire. It’s the little things that will absolutely annihilate you should you find yourself without electricity – and you’d be surprised at just how big of a role the absence of electricity plays in our finances after a natural disaster. Here’s the lowdown on what you need to prepare for.

Are You Financially Prepared for Hurricane Season?

Most of those who have ever evacuated due to an approaching tropical system know that the early bird gets the worm. Hotels north of the coastlines on the Gulf Coast and west of the coastline on the East Coast fill up fast. Those who are best prepared know to make hotel reservations as soon as it appears they may need to evacuate. That means your credit card will have a hold placed on it. That also means your available credit needs to be enough to support that hold; otherwise, you may not have a room waiting for you. Also, some hotels won’t accept a debit card, so that’s going to be a factor as well.

Meanwhile, there are other expenses associated with evacuations. A full tank of gas being the most important. The lines at the gas stations can stretch for blocks or even miles. If you swipe your card at the pump, you may have another hold put on your credit card. Your best option is pay inside after you’ve filled your tank. This way, there’s no reason for a hold to be placed on your account.

And don’t forget the cash. There’s no way anyone can be financially prepared for hurricane season without cash. This is important not only before the storm, but after it makes landfall and you return home. You may discover you have no electricity at all. Take it from someone who’s lived through ever Gulf Coast storm since Camille: no cash means your options are severely limited. There aren’t ATMs when there is no power to run them. You can’t swipe your credit card or debit card as you’re checking out because first, you may not even find a store that’s open in the days and weeks after landfall, but even if you do, there’s a good chance they don’t have electricity either. You can be sure it’s a cash only dynamic.

Another tip that’s important is one that’s not been around for many years: you should consider signing up for online banking. This is important for a few reasons. Many discover that even if their home doesn’t have electricity, a cell tower a few miles away may be up and running – and that means you can still get alerts letting you know your payroll’s been deposited or you can at least stay on top of your balance so that you know what you have after the electricity’s been restored.

If you’re without electricity, you should consider turning your cell off when it’s not being used. This could extend your battery life and therefore extend the one lifeline you have.

There’s not a soul who’s been through a hurricane who doesn’t have an escape kit. They keep their insurance papers, credit card information, banking information, medical documents, lists of medications and other similar paperwork in one big box or envelope so that they can grab it on their way out the door. At a minimum, many families have checklists that they use to make sure they can put their hands on all of the documentation at a moment’s notice. Also, don’t forget the paperwork associated with your property. This is important if you discover you have to file an insurance claim.

Consider a prepaid card as well. This will allow funds to be added quickly from anywhere in the world. This can come in handy if you need cash, but your bank’s not reopened. Relatives can add funds to the prepaid account much cheaper than wiring the money to you – which you may not be able to get to anyway. If you have a prepaid card, it’s right there in your wallet. Provided you can find an ATM, gas station and supermarket that’s open, you’ll be able to cover your needs.

Finally, it’s a good idea to bring your camera with you, unless it’s on your cell, in which case you’ll have it with you anyway. A camera allows you to memorialize the damage as you’re returning home. The insurance companies will want this type of evidence and you’ll want to keep a copy for your own records.

Have your own tips? Share them with us – we want to know what works best for you during hurricane season.